Surgical Masks: What are they good for? (Absolutely nothing?) Depends on who you ask...

Many Westerners are unfamiliar with the habit of wearing surgical masks, and may even be internally alarmed at the sight of people wearing them in public. (Admit it!) On a recent flight home from Korea, I wore a surgical mask along with (borderline obnoxious) sunglasses during the long flight from Seoul to Vancouver. No one commented on my appearance. Once I boarded my next flight from Vancouver to Newark, I was met with apprehensive stares by other passengers. Honestly I was also surprised to see them: With the brief exception of a 2 week stint home between my teaching contracts, this was the largest group of white people I had seen in 2 years.

As I made my way to my seat like a zombie, a woman in front of me asked (loudly):"I hope we don't have to worry about that?" There was a long pause as I realized when she said "that", she was talking about me and my mask. "It's OK, I'm just sick" I said, and realized those probably weren't the reassuring words this woman was hoping to hear. I corrected myself, "My throat hurts, I mean - I just want to stop coughing. It's dry in here". This response seemed to register with her in a positive way and she bantered with me about how nice it is that I want to keep my germs to myself.

In Korea, wearing surgical masks is a common practice among all ages. My initial experience with the surgical mask (aka smog mask) was that it made my cheeks sweat because apparently I pant like an animal through my mouth when I breathe. Thus, I think these masks are best when worn for a short duration of time. I often wore them walking around my neighborhood, on buses, or running errands. The white mask pictured below typically comes in packs of 3s and can be bought at any convenience store.

Do these surgical masks even work? Do they protect you from airborne viruses? Some people say yes. Do they protect you from toxic smog and air pollution? The consensus is probably not, or very little if at all. ::womp womp:: Nonetheless, toxins in the air are inescapable, and after levels of record smog blowing over from China in 2013, I was willing to try anything to prevent from breathing that stuff. ㅠㅠ


So, other than the wishful thinking that it might prevent you from inhaling nitrogen oxide and sulphur, why else put on one of these masks and walk around looking like a dental hygienist all day? Research has shown that, in Japan, the masks are being worn by women for cosmetic purposes or to hide their faces. Reasons described in this article provide the following alternative uses for surgical masks, from a questionnaire completed by women only. 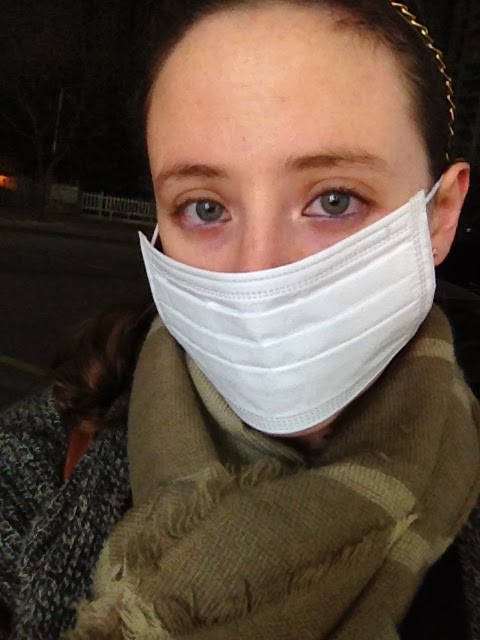 NOT A FASHION STATEMENT.

Is air pollution a serious problem in Korea?

If you are accustomed to the dangerous toxin levels in Beijing, you'll probably be like this when arriving to Korea. Still, much of the air pollution in winter months in Seoul originates in China and blows over the Yellow Sea to blanket Western parts of the country. It's not as grave a situation as in Beijing and some other Chinese cities, but it is still can reach dangerous levels on any given day.

Here is a photograph of the view from my school in Suwon comparing a clear day to a smoggy, nasty, toxic day:

As you can see (or can't, hah) very low visibility on the right. On days like that, I basically sprinted to my school to avoid the outside air and stayed indoors as long as possible. Even still, paranoia gets the best of me and I'm like I think I'm getting the black lung pop!

I understand there are many contributors to this problem as China rapidly modernizes. Still, for starters, countries should embrace alternative means of industrializing and wean themselves from their reliance on coal. Until that happens, I'll be wearing smog masks in vainly and in vain it seems.


EDIT/UPDATE (11/12): Obama visited China this week announcing a Climate Accord with China (after reading this post no doubt). SOUNDS PROMISING.....But despite the promise of tighter regulations and decreasing carbon dioxide emissions in the future, President Xi Jinping says emissions in China will peak around 2030....Soo...1. Let's hope somebody designs a better smog mask over the next decade and 2. Must invest in bottled air before 2030.

Popular posts from this blog

A story of picturesque views, gondola rides and spider bites Fantastic views in the Fall from the top of the mountain at Phoenix Snow Park, PyeongChang, 2013. Olympic prep and advertising was ongoing, even in 2013.  Woot woot! The Olympics will soon begin in PyeongChang, South Korea bringing the global media spotlight to Korea for a month. I made a trip to PyeongChang in September 2013, when preparations for the Olympics were already underway. My impression of PyeongChang from my brief trip there is likely a typical refrain as a foreigner venturing outside the big cities in Korea: Delicious food, friendly and helpful people in the town, beautiful clean air, gorgeous natural scenery, traditional buildings and.... MASSIVE SPIDERS. MASSIVE. SPIDERS. Korean Spiders: Demons of the countryside The hype for the Olympics has brought memories from PyeongChang to the front of my mind, including an unfortunate encounter with a Korean spider. I'm from New Jersey so I
Read more

You can take the girl out of Korea...but she's still gonna bow to the ATM?

Perhaps the most famous street in Korea, Sejong-ro with Gyeongbokgyung Palace in the background.  Wow - the only photo of my time in Korea where I'm not throwing up the V sign. Some habits I've internalized after living in Korea: I like to sit on the floor (nothing beats sitting on the floor with a blanket and 온돌/ondol floor heating in the winter in Korea ooooooh it's so good I've even fallen asleep). The chopstick habit. Soup? Noodles? Meat? Birthday cake? Chopsticks. I cover my face when I laugh. I bow to everyone (hostesses, cashiers, extended family, ATMs...nothing is safe). Conversing via Kakao emojis (who needs words?). How long before these habits erode away in a different cultural environment? It makes me sad to think the day will come where I don't bow to the ATM.* >.< My observations about American life feel refreshed since I've been living outside this culture for so long. Here are a few things I've noticed since being back
Read more